e-Ink display and smaller in every dimension

Hi there Tcube team… I am loving my 2e, but I think the 3e can be better.

I would love all the repairability features of the 2E, plus the options to replace the standard screen with an e-ink display. I’d also like a phone that’s smaller in every dimension. I realize of course that means a smaller battery but with an e-ink display that shouldn’t matter as much right?

Would love to hear more on what is your intended usage. Is the intent to get away from smartphones a bit?

I guess you could say that. I’m not on social media. I don’t take a lot of photos. I need a phone for text and calls and email, and some apps like Vivaldi browser, Duo Mobile and Microsoft teams, outlook. I also need NFC payments, and podcast/music listening via Bluetooth earbuds or the car. My primary complaint about my previous phones is the battery didn’t last long enough and a broken screen was too difficult to replace.

Is this UX of something like the LightPhone what you’re going for? 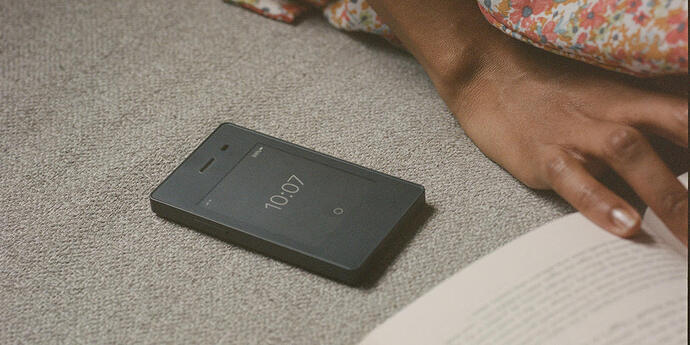 Light is a radically different technology company. We design beautiful tools that respect and empower our users and our first product is The Light Phone.

I like the light phone… But it’s a step too far…I want an Android phone. I need more apps than I originally thought…also need Maps and a few lesser known ones for my car, vacuum, smart home appliances, my work/school, some parking app, Nextdoor, IMDb, Wikipedia, clock, calculator.

You’re basically in the exact same space I am in regards to what I would like to have, and need, out of my phone.

I would love an actively-lit E-Ink display. I, like you, need (unfortunately) mobile apps for work and many aspects of day-to-day life.

The LightPhone is the right hardware, but I think the OS is too limited to be an “only” device for me, and many folks.

Is it more about eyes (e-ink) or more about reducing your phone time?

One concept that I have imagined is a fully-featured Android phone that can only be used for 1-2 hours a day. The primary goal would be to reduce smartphone addiction (avg in the US is 5-7 hrs/day) while still not going stone age way (flip phone, etc). And you can “cheat”/extend 1-2 times a week or month

. What do you think about that? (regular LCD display to start with though).

For me it’s more about the battery life. What you are describing sounds like the “digital wellbeing” features already built in to Android 11. Personally I never understood that idea: “I set a limit on my own smartphone use because I’m worried I’m an addict, but also I can override the limits at any time.” That’s not how addiction recovery works. Imagine it like this: “Since I’m alcoholic I’m only drinking two drinks tonight, unless I decide later I want to drink more.”

“I set a limit on my own smartphone use because I’m worried I’m an addict, but also I can override the limits at any time.” That’s not how addiction recovery works.

You are right about the built in Google and Apple tools. What I’m referring is to a custom software implementation with hard limits. The phone will become “basic” (only calling) after you use it for say 1:30 hours (time limit could be fixed by us or is auto-determined to be half of what a user’s current average is).

Btw - this will boost the battery life too!

For me it is battery life, outdoor visibility (I use my phone for sUAS and other GPS survey, so having both is key), as well as a secondary benefit of the UX of E-Ink making my phone less attractive as a time-waster. It actually will likely encourage me to use it more for reading and studying, which is also a benefit.

I’d need a flashlight too, but mounted on the top corner… you know so I can hold the phone like a flashlight (or 90 degrees from how every smartphone flashlight is now).

Also it would be nice to be able to adjust the flashlight brightness and color temperature.

I would give up video conferencing for an e-Ink display. I speculate that the tech companies obsession with video conferencing is because of a generation of executives who grew up watching Sci-Fi movies set in the future that all had video phone calls (Blade Runner, Total Recall, BTTF2).

I’m over it. TBH it’s amazing how far video conferencing has come and how poor it still is. It’s all about the network… which in this nation is…in need of improvement. Also, you know what? I actually don’t want people to see me when I’m in a conference call. I almost never turn the camera on. And in my experience most of my colleagues don’t either.

This topic was automatically closed 54 days after the last reply. New replies are no longer allowed.