Use Linux to revert to stock

I’m presently running Iodé, which appears to be based on the Lineageos port the Indian college student who appears to be Teracube’s system software team doesn’t appear to have what it takes to get things like WiFi calling working. (Sad!). (Same story with TWRP and encryption: Sad!). Without TWRP and a working Lineageos build, Teracube will never be taken seriously by the XDA community. Posting sorta-almost-works builds at XDA obviously doesn’t count, judging by lack of interest.

Maybe their stock builds are mostly done by the Chinese who make the phones (spyware!) or some contractor. Anyways, WiFi calling is said to work, and I need it, so I’m thinking of reverting to stock, but the revert instructions all seem to be Windows based and using some special software.

Can it be done just using standard Linux tools like fastboot and adb? If there aren’t partition layout issues, it should be straightforward: ‘fastboot flash etcetc’.

Is maligning folks who are working to help us really constructive? Being berated and maligned doesn’t exactly motivate folks well, despite the ages-old adage of the carrot vs the stick.

When their system software team, such as it is, is as bad as it is, the stick is appropriate, as there’s really nothing to carrot. I can only assume their business plan is to make the sketchy low-investment play they appear to be making, entirely in the hope of being bought out. If a serious alt/indy company like Fairphone decided to make a USA-bands phone at a reasonable price (like way under the $900 or so I think Librem charges), I don’t see Teracube surviving, so acquisition soon must be the goal.

If there was a USA phone with a removable battery and an actual working Lineageos-based ROM and TWRP recovery I could afford, this phone would be here in the For Sale adds immediately.

HI @jbray as I understand, You’re facing issues with WiFi Calling aka VoWiFi, can you link me the exact build you installed?

I’m running Iodé 2.5, their most recent build. It is based on a Lineageos build, and the only ones I know of are the somewhat-works one by the Teracube software team guy, which states that VoWifi is not working yet. XDA thread:

Introduction iodéOS is a privacy-focused operating system powered by LineageOS and based on the Android mobile platform. iodéOS aims at protecting the user's privacy with a built-in adblocker and by freeing the smartphone from snitches. The... 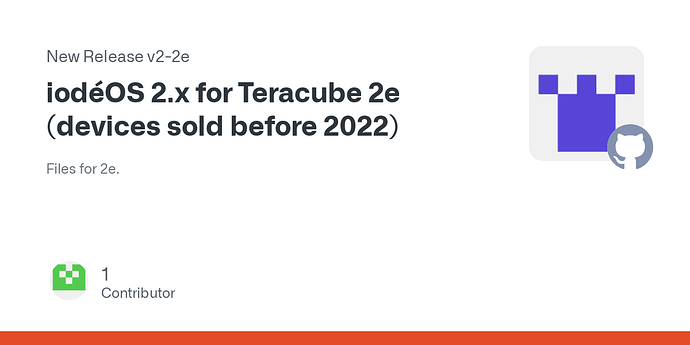 It’s a good rom, but it’s clearly using the Teracube guy’s device-specific Lineageos stuff. Presumably getting something like VoWiFi working means dealing with the device’s radio and call stack, calling into their radio code and such, which only Teracube and the hardware makers may have the specs for.

Iodé, BTW, is a really nice rom, one of the best I’ve come across. The French still have style and polish, at least that guy.

BTW, I found the SPFLASH page. It’s written in what I take to be Chinglish and isn’t open source, so I don’t really trust it. It sounds useful, but I’d still rather use fastboot etc if I could.

Following the links on the iodeOS website eventually goes to the installation directions, which will link you to the correct downloads for both recovery and sideloadable zip. This does include 2.5 as well as prior versions.

Hi @jbray , I think you should give a try to Gagan Malvi’s LineageOS builds, I think he shoukd have vowifi working.
Also yeah VoWiFi stuff depends on working of MediaTek IP Multimedia Subsystem (IMS) , & its easy to deal with mtk ims these days.

Also you can download SPFlash tool from Download SP Flash Tool v5.1728 for Linux - Mediatek Flash Tool , its the official page for sp flash and isn’t something fishy ( I use it too :D) .

Also yeah regarding stock rom, TeracubeUI aka Teracube’s Stock ROM is made and compiled by bunch of Developers from India, EU & US. Teracube compiles the stock on their own instead relying on chinese vendors. The opensource kernel code used in teracube’s stock rom is available at 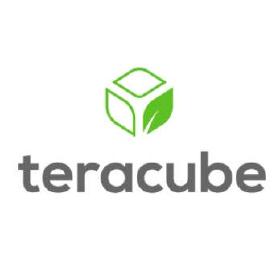 Teracube has 5 repositories available. Follow their code on GitHub.

And you can flash the partitions via fastboot too, i guess if you’re using 2e(2021) , you can boot to fastbootd mode and fastboot flash super super.img & fastboot flash boot boot.img should do the job, still i recommend following the official revert to stock thread.

The Lineageos build for the ‘1st batch’ 2e dates from February. Meaning no security updates since then, won’t run it. The Iodé people are clearly doing their own builds, as they note security updates. 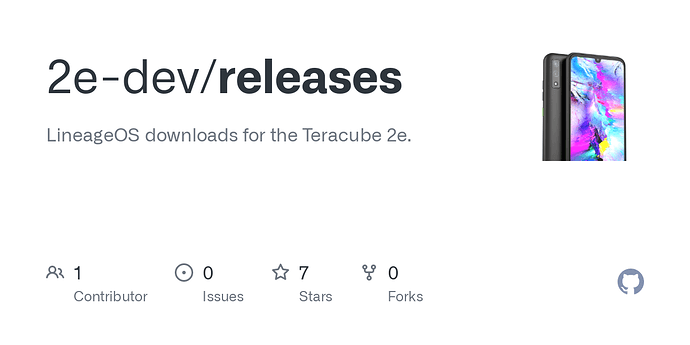 LineageOS downloads for the Teracube 2e. Contribute to 2e-dev/releases development by creating an account on GitHub.

In other words, it’s pretty much deadware.

The Teracube page for this also still lists VoWiFi as Doesn’t Work (untested).

I’m sadly not up to it myself (don’t even have Wi-Fi where I’m living) but the fact that no one has pulled the source and at least made occasional unofficial builds shows that there is essentially no interest in this device among the XDA community, which is somewhat surprising given how ROM-friendly it is. A working TWRP at least might bootstrap the process, but not happening either.

I think the team is working on stock A12 updates so things are taking time.

I looked into it, and it seems like there are a fair number of moving parts, and perhaps bricking possibilities if one doesn’t start from stock. It’s an interesting idea, anyway.

It may be moot for me, as the reason I needed it was really sad T-Mobile coverage. I just switched to them because Cricket/ATT is just that bad (see thread about them apparently deliberately turning off VoLTE for long-term customers to facilitate their LTE+5G-only upgrade).
T-Mobile coverage here is enough less than ATT that I will probably switch back, see if new acct comes with VoLTE. ATT is so bad and evil that no one should ever use them, but there it is.

[GUIDE] [Q&A] [TREBLE] From Stock to Treble - everything you need to know!

Here I will share all the info you need to know about using Treble on the Mi A1. Everyone is more than welcome to ask questions and clarification here, I am happy to answer and will update this thread over time. Thanks! Contents 0. Key Terms...

GSI will not brick your device at all if you follow the flashing instructions, for further help you can join Telegram: Contact @teracube_oss telegram group too for guidance regarding GSIs.

Also if you want better stability, you can try using teracube 2e’s stock rom, i’m pretty sure there is no spyware/trackware in them, and as i told, TeracubeUI aka Teracube’s Stock ROM is made and compiled by bunch of Developers from India, EU & US. Teracube compiles the stock on their own instead relying on chinese vendors. The opensource kernel code used in teracube’s stock rom is available at Teracube · GitHub . So you will have less hassle and can enjoy bug-free experience.

Thanks much Aryan. If I have further questions, I’ll ask on Telegram.