Very different screens in the 2e's

has anyone noticed that has more then one 2e the screens vary a LOT as far as whites and contrast goes. the one we got today is super yellowish on white screens like i dont even think id call that white its WAY to warm this one is not even close to being white the viewing angles are also very bad on this screen at anything but straight on looking at the phone it fades out really fast even even at like a only a 10-15deg angle. there is only one spot where its clear that’s directly straight on, the 2 we already got a weeks ago one is much much colder almost like a daylight bulb blue ish on whites and the other one is the best of them in between and almost spot on whites. im surprised at how much they vary from one 2e to the next. ill put all three on the colorimeter to see where they all fall kelvin wise. but as part of my husbands business he does isf calibration on monitors and tv’s as he took one look at the one we got today and literally said wow that is WAY off. just curious if anyone else has taken a look at them who has more then one. i know its not an expensive phone but if i could somehow show these three all in a row all three screens are WAY different from one another not even close to each other white and contrast wise.

what would it cost to get a new screen sent out to swap this one with?

Since these are brand new, we will just replace the entire unit. Could you send an email to support@myteracube.com to get it going.

oh wow thank you so much i will do that tonight when i get home. i appreciate it very much. the other 2 do look different from one another also but at least they are both in the white spectrum if you know what i mean. those 2 are very very acceptable and look really nice in this price range (not being amoled or anything like that)

just to show the difference here you can see how yellow / pink this screen is. night mode is NOT turned on since that has been suggested now to me by a few people. 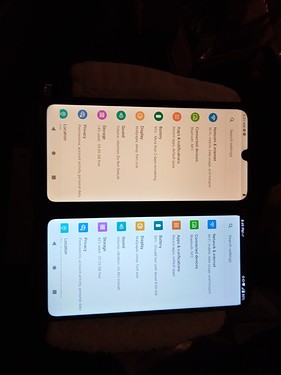 Thanks for sharing the pics. I had the same thought when we saw the pic - is the night light on. Since its not, that is a hardware issue.

i did send a second pic next to the other 2e we have so you can see it next to 2 different 2e’s i think my husband sent an email back we had a family emergency this weekend so im not sure if he had a chance to check emails or not. we had a family member pass so everything else was put on hold. he will check tomm we are driving home tonight.