Enjoying my Teracube how about you?

I can honestly say I’m enjoying my Teracube. I cant wait to have Android 10, would love to see a little processing power in the camera (Google Camera). Loving the big bright screen, it charges fast and last long. Its been my right hand device during these slow times at work. Plays every game I’ve thrown at it so far. I really like the weight of the phone also. I’m really glad Teracube decided to put 6 gigs of ram in. How are you liking your phone?

Thanks @Rodney_Davis for starting this discussion and for the great review . Its good to have some non-issues related discussions here sometimes

Been loving it! Switched over from an iPhone 8+, and the difference in battery life is incredible. Rarely does the battery drop below 50% before the end of the day, where I would often have to plug the iPhone in immediately upon getting home from work to keep it from dying on me.

Enjoying it so far! I’ve only started to set it up, and I’m so used to seeing my phone at 30% after 6 hours that it was kind of a shock the first time when it didn’t happen.

Also used to seeing a bit of lag and there’s a huge difference. (I’m stuck at home now so I haven’t made a jump from my Moto G5 Plus yet, but I’m excited for when I do and not have to deal with carrying my cables around all the time.)

My fiance has a Iphone 8 plus and build wise they feel very similar when I hold them at the same time. To me that’s a good thing. I like a little weight in my phone’s. I will be almost out of battery when I go to bed but I’m a heavy user. With my Pixel or an iPhone I would be almost out of battery around 4 or 5pm starting at 7am. When my battery sign comes on it doesn’t stress me out anymore, I will still have hours. Oh and the head phones that came with it has came in handy and alot better quality than I was expecting. I use them for music and playing games. Google assistant on them works well for me to. Wish I could talk my fiance into trying Teracube but she’s an “Apple Person”.

I am so glad to hear that many of you are enjoying the phone so far. Many of you probably don’t know this but I am a fanatic when it comes to preserving battery. I am obsessed with making my phone last as many days as possible. I am happy to share that I have been running my Teracube on a average between 4.5 to 6.5 days in the last 6 weeks.

I am currently working on a best practice guide for those who are interested.

I am enjoying my Teracube very much. I have been using my Samsung phone again more recently, but soon I will have multiple SIMs of my own, and will have it active regularly (instead of switching back and forth).

I would love to have Titanium Backup working with this phone, but I am enjoying using it.

Your not the only one my entire family love this phone. So glad we took a chance 9n this phone

Still enjoying the phone! I am spreading the love among friends and family

I’m finding that I need to charge my phone in the evenings – between 3-5pm – if I want it to last the rest of the night. I am a heavy gamer tho. But I’d love to know if there’s something I could be doing to preserve the battery longer.

General enjoyment of phone, but some things we’ve noticed: For whatever reason the cell services isn’t as good as with our previous phones. We have not changed providers nor moved locations; but we’re finding it much harder to make actual phone calls.

Also, vibration settings are limited and even on the strongest setting, with no case on, I often can’t hear/feel it vibrate.

There’s no flash on the front facing camera? Very sad for picture taking. Also, in general the camera seems weaker than other phones and it’d great if there was a way to update that.

IDK if this was the right place for these comments. If not, let me know where to place instead.

Could you install Acubattery app, configure it and share your stats/screenshot after few days of usage. And just to confirm - have you upgraded to SW6?

IDK if this was the right place for these comments

This is the perfect place to share your experience - good,bad or ugly.

Could you open a new topic for the issues you are experiencing - we can try to diagnose there.

gaming and screen usage are two of the biggest factors in battery depletion. There is not really a way around that. For me, I am light user and I do a lot of things to prolong the standby time. That is one thing I feel like many of us can benefit from.

4 posts were split to a new topic: Battery drain?

I used to use a Google Nexus 6P - a beautiful phone with lots of power and plenty of memory, not to mention a great display! But suddenly last October, it just died. Could not recharge, could not start up – a proverbial brick. I switched to a cheap Alcatel phone I got at an AT&T store. Not a suitable replacement, but I did not have time to research what I really wanted.

I learned of the Teracube on Indiegogo, and was really taken by the amount of storage on it (and the price for an early-bird) I ordered 2 of the Teracubes because I thought my wife might want to replace her Nexus 6P also, after all the Nexus phones were acquired in 2016.

I received the phones pretty early in the shipping cycle. I took one of them out of the box and transferred my SIM card to it, charged it up fully (goes quickly), and turned it on. I enjoy using many of the services that Google offers to support Android users. Within a day or so, all my “stuff” from the Alcatel phone had migrated from its safe haven in Googleland to the new Teracube. I have been using the Teracube ever since, and it works really really well. Well done guys.

The Teracube is slightly smaller than the Nexus, but still has a plenty large screen. It is a little lighter, too, than the Nexus, and the processor is subjectively noticeably faster. I like having the later version of Android, though it seems to handle app closure differently, and I had to learn a new way to handle closing apps. I notice as well that the battery life is far superior to the Alcatel phone, though not quite so superior to the battery life of the Nexus.

Try the Teracube, you will like it! Sadly, I have not been able to persuade my wife to make the switch yet. Her Teracube remains in its original box.

Enjoying my Teracube as my first Android phone (my work phone is an iPhone XR)
Only drawback so far is the poor quality of the camera which I was hoping to use for Instagram posts and other than that, love it !

and unfortunately already broke the glass back …

the plastic case dropped off and the phone fell flat … 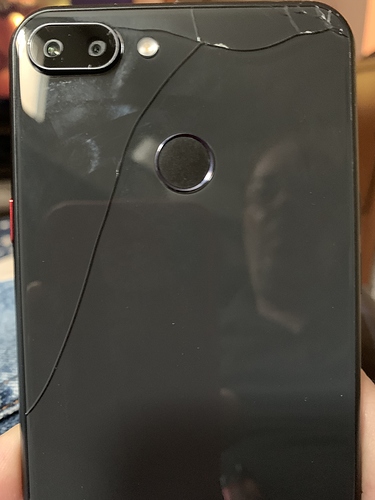 I really like my actual device… Once the security patch is up and even android 10 it will be great. I am coming from an Essential Phone that was updated as fast as Pixel Devices and I have to say I miss that, but besides that it’s good. I am hoping that Teracube will look at even building an Android Tablet or Chrome OS Tablet.

Here in a few months we’ll have some better cases. Good thing it’s only 39 bucks to fix! lol I had to use my warranty also. They made it an easy process.