Teracube One will get Android 11 and 12 - both in sequence. Current plan is to have Android 11 Beta in 2-3 months timeframe followed by testing and final release. Internal work for Android 11 has already started. I agree - we are running quite behind with the Android versions. We will continue to shorten the time between releases and hopefully catch up with base Android versions in 1-2 years.

Some rather impatient people around reading this thread. I just did the over the air upgrade to android 10. And so far it has been nice. No problems, actually rather quick in terms of upgrades i’ve had seen in prior phones and versions of android. I will say that the camera app not having a pandoramic feature is a bit sad, but I suppose I can live with that until the next update to 11.

People forget Teracube is not a sumsung or apple with teams up on teams to get the job done quickly. But for the team they had, and the pandemic at hand, I think they did pretty decently.

Looking forward to seeing the learning curve drop off from lessons learned from android 10 rollout to see an even smoother android 11 rollout.

Has anyone done the upgrade 10.0.2 that was already on 10 and didn’t have to do a factory reset? I really want to avoid the factory reset but I also would like to get to the latest version. My phone is getting very laggy and slow. Hoping the latest upgrade would fix this.

@Sharad any update on when 10.0.2 is going to be packaged so it can be pushed out to phones? The post you linked above mentions that the pushed update wouldn’t require a factory reset.

@Sharad any update on when 10.0.2 is going to be packaged so it can be pushed out to phones? The post you linked above mentions that the pushed update wouldn’t require a factory reset.

Downloading from forums vs getting it via the OTA app does not make a difference.

Looking at the post on 10.0.2 I suppose what I probably should have asked is any update on 10.1.0? Trying to avoid a factory reset but also don’t want to wait months so trying to weigh my decision.

A post was split to a new topic: T1 - bad cellular signal?

The experiment is over for me, I ordered a new phone yesterday. It was fun for the most part but I just couldn’t deal with the downfalls anymore. My phone has gotten increasingly laggy lately, most of the time to the point where it won’t respond so I have to do a hard restart every couple of days. I paired my frustration with the realization that I would like a 5G phone since I get 5G for free and did simultaneous speed test with my wife’s 5G phone. I was getting 4MB download and she was getting 20MB+. Even if all the bugs get resolved, the upgrades start flowing in, at no fault to T1, it will never be 5G so I decided it was time to make a switch. Good luck on the rest of the adventure everyone, I do truly hope the future is bright for Teracube and it’s user base. Godspeed!

@Sharad Any updates on the progress?

All I’ll say is this 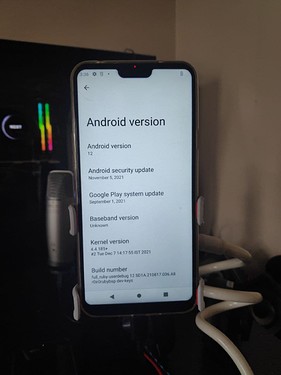 Oh snap! What a tease! Looking forward to it.

I couldn’t hold showing it off

. However, the Devs won’t be happy since it’s still early days and a lot more work needs to be put in for porting kernel and other stuff.

Yeah, I’m happy that you shared!

Are we still joining the 2E and One kernel and device trees?

Sort of, yes; T2e is added up to the unified BSP project, but those builds may appear much later.
T1 will be upgraded to Linux 4.14 for A12.

Fantastic work! I know that is not easy.

How does viability of going to 5.4LTS and beyond looking? From what I understand, we need that for Android 12+.

I have had a T1 phone since the very earliest of its availability. I use AT&T, and the T1 works fine.

When I got my T1, I ordered 2 of them as I thought my wife might want to switch to it. She did not. She continued to use her 4-5 year old Nexus 6P. Then late last year AT&T informed her that they were blocking her phone because after the 3G shutdown, it would no longer work. At that point (maybe 6 months ago), she took up the T1 and it works fine for her as well.

One odd thing happened that I do not quite understand. A couple of months ago I received notice of the Android 10 upgrade, and it duly happened. My wife never got a notice nor did she get an upgrade. Perhaps there is some kind of registration needed with Teracube that she did not go through.

I am pretty annoyed that since the T2e came out, the T1 is getting ignored. I want something with 5G capability, and soon.

Hi @geezernerd - we are working on Android 12 for T1 and should have the Beta release soon. Ideally we pushed the Android 10 update to all T1 phones. You can do one of 2 things on her phone:

How soon is soon!?
The post was back in April and now we’re already in September and we’re still on Android 10!

I would like to see a software update (Android 12+) as well. At this point, having the stock android 10 with no updates means security bugs that can make the phones vulnerable to hacking attempts.

Looking forward to another version of Android OR a way to do it ourselves. I would like to know that the software will actually get 4 years worth of updates before I invest in a Terracube 2. The whole reason I got the T1 phone was to keep a phone for 4 years with full support (and repairability).

@Sharad I am highly disappointed with the lack of T1 updates. I use it often as a backup but can’t use for work stuff due to lack of security updates.